As I described in my last post, the World Health Organization has declared that the Ebola crisis has ended. I figured now would be a great time to describe a brief history of the Ebola Virus and what the scientific community is doing to protect us from the next outbreak. 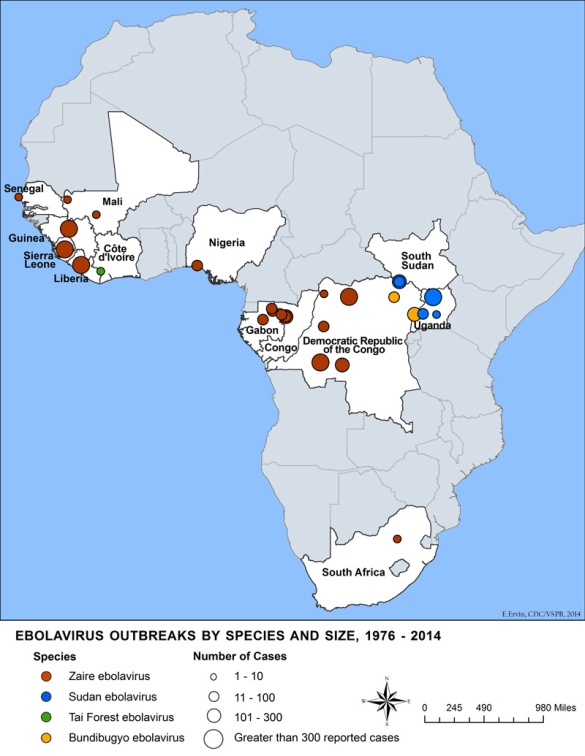 Map detailing the sources of Ebola outbreaks, from 1976 to present (CDC.gov)

The Ebola Virus, as viewed under a microscope (CDC.gov)

While the Zika outbreak has captured much of the attention of the news, there is some important news that just released on the Ebola outbreak that occurred last year. On February 19, 2016, a major change occurred in the United States’ response to the Ebola crisis. The Department of Homeland Security decided to end its enhanced screening procedures for those who were arriving in the United States from countries in Africa that experienced the Ebola epidemic. The screenings included temperature checks at five of the major international airports in the country, including JFK, Newark, Dulles, Chicago, and Atlanta. This decision was made after the World Health Organization declared that the Ebola outbreak was over. It has been more than 42 days since the last known Ebola patient recovered, marking a period twice as long as the incubation period of the disease.

For now, it looks like the Ebola crisis has ended. In my next post, I will discuss where Ebola came from, and what we are doing to prevent an outbreak like this from occurring again in the future.